The store will not work correctly in the case when cookies are disabled.

HOW TO SELECT A THIN-FILM SAMPLE SUPPORT WINDOW (TEST)

Chemplex® has been deeply involved in developing thin-film sample supports since 1971. There are many apects that are to considered in determining which thin film is proper choice for a paricular application which include chemical resistance to sample attack, tensile strength and low mass attenuation coeficient values. Then comes the ease of use factors, continuous rolls, precut circles to to SpectroMembrane® Carrier frames that completely eliminate annoying static cling and contamination issues.

Resulting from our extensive experience in thin-film sample supports, we have created the following simple three-step approach to thin-film selection.

3. Thin-film configuration: Choose a thin-film format that is most conveient for the user.

Chemplex® has taken this simple three step approach and developed a new interactive Windows application which will aid the user in filtering, sorting and selecting the thin-fim best for their particular application.

The second page allows the user to explore transmittance curves (percent transmittance) for the different thin-films and thicknesses. The user display from one curve to all of them (eliminating the curves that they are not intersted).

The third page allows the user to select a thin-film type and thickness and see what formats are available.

The following steps outline the download and install process of the Thin-Film Selection Guide:

2. Enter your username and password (must be a registered user)

4. When prompted "What do you want to do with ThinFilmSelectionGuide.Zip? cick "Save" (for downloads folder) or "Save As" and specify folder name

8.  When prompted "Publisher cannot be verifed" click on "Install"

The first step in the selection process is determining the resistance of a thin-film to chemical attack by the sample, especially liquids. The following table simplifies the process. The top row indicates the chemical classification of sample substances and the various thin-film materials. Identify the chemical classification of the sample from the first column titled Chemical Classification. Scan across that row to one or more columns illustrating the highest rating of the thin-film simply expressed by Excellent, Good, Fair, Not recommended (N/R) and Unknown. The thin-film related to the rating is directly read from the column headings.

IMPORTANT: Some window materials may not be suitable for analyzing sulfur in diesel fuel, gasoline and other petroleum products containing aromatic hydrocarbons. ASTM D-6445-99 (Reapproved 2004) e1: “Samples of high aromatic content may dissolve polyester and polycarbonate films. In these cases, other materials besides these films may be used for X-ray windows, provided that they do not contain any elemental impurities. An optional window material is polyimide film. While polyimide film absorbs sulfur x-rays more than other films, it may be a preferred window material as it is much more resistant to chemical attack by aromatics and exhibits higher mechanical strength.”  ASTM D 4294-08a: “Any film that resists attack by the sample, is free of sulfur, and is sufficiently X-ray transparent can be used. Film types can include polyester, polypropylene, polycarbonate, and polyimide. However, samples of high aromatic content can dissolve polypropylene, polycarbonate and polyester.” Chemplex Industries, Inc., assumes no liability whatsoever in the purchase and use of any thin-film sample support window film regardless of configuration, suggested uses and  applications, claims, reports, exhibits, advertised or written or orally expressed or insinuated. Judicious testing and evaluation is strongly recommended before purchase, use and acceptance of these products. Samples are available at no charge for evaluation purposes.

The second step indicates the performance of a thin-film in permitting an analyte-line permeation expressed as Percent Transmittance values. Some thin-films are available in different thicknesses or gauges that reflect their influence on Percent Transmittance. The highest Percent Transmittance value represents the most desirable choice. Analyte-lines are expressed in energy, KeV for EDXRF instruments and wavelength, Ångstrom units for WDXRF analysis. In the event the spectral line of interest is unknown, the following link is helpful http://csrri.iit.edu/periodic-table.html. Simply click on the element of interest for its energy expressed in KeV units. The KeV values are easily converted to Ångstroms from the following relationship: Ångstroms = 12.39/KeV. 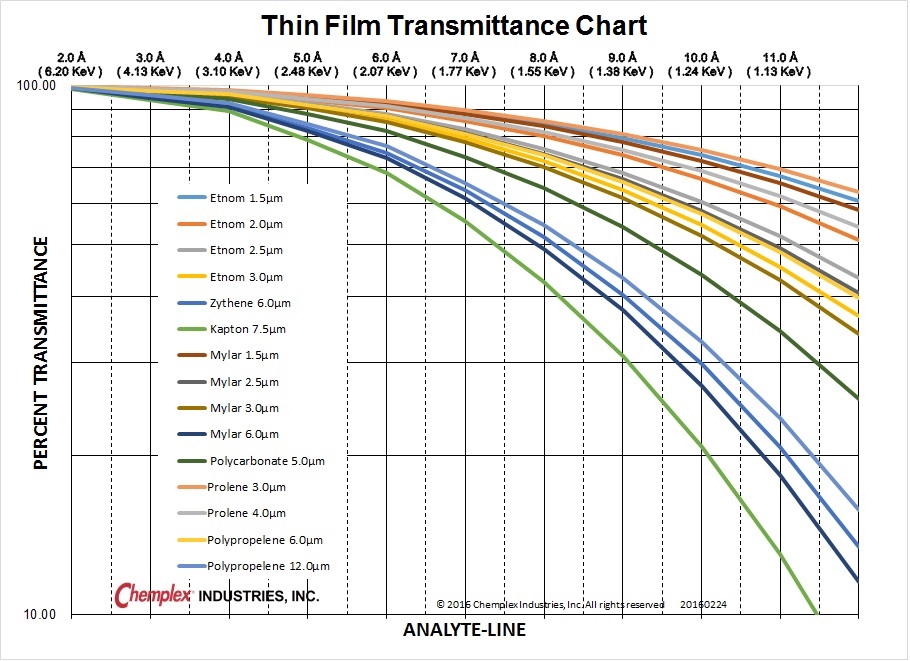 The third step invloves selecting which format of the thin-film and thickness best suited for the end user's application. Chemplex offers thin-film substances in a variety of configurations to satisfy: economic, convenience, or contamination reasons. For these purposes thin-films are available in continuous rolls in dispensers with cutting edges, continuous rolls but perforated at 3” lengths to form 3” squares, pre-cut circles on special lint-free paper that serves as carriers and SpectroMembrane® Carrier Frames. With the exception of SpectroMembrane all other configurations are inherently static charged justifying the “annoying static cling” expression. SpectroMembrane consists of a thin-film perforated in a circular line pattern mounted on a paper frame. In the sample cup attachment procedure the frame automatically detaches from the frame leaving a circular thin-film affixed to the sample cup. Contamination issues are completely averted attributed to limiting personal contact through manipulation of the frame. And, there are no “annoying static cling” issues. The Thin-Film Selection Guide from this website allows displays all of the available thin-films and allows some sorting and the cability of adding those directly to a cart.